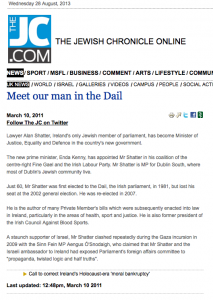 Their man in the Dáil

So our minister for Justice, Equality and Defence is without hindrance sending our soldiers to the Golan Heights. You might note that in the description of his department defence comes a poor third to equality (what ever the hell ‘equality’ means). I have written to Mr. Shatter before enquiring about his military or indeed policing background. Seemingly he has none. Would you let a gardener install a gas system in your house? Of course you would not.

Was everybody so polite that they did not question where Mr. Shatter’s allegiances lie or whether Mr. Shatter was connected to the Mossad? Who exactly does he hold allegiance to? These are very important questions for someone in charge of state security and secrets, so why do we let this D4 south side johnny hold this important ministerial office? He now holds the two state security portfolios in the cabinet. To my mind this is a very dangerous precedent. It is also totally undemocratic. Is his aim to merge the army and the guards into a paramilitary force? 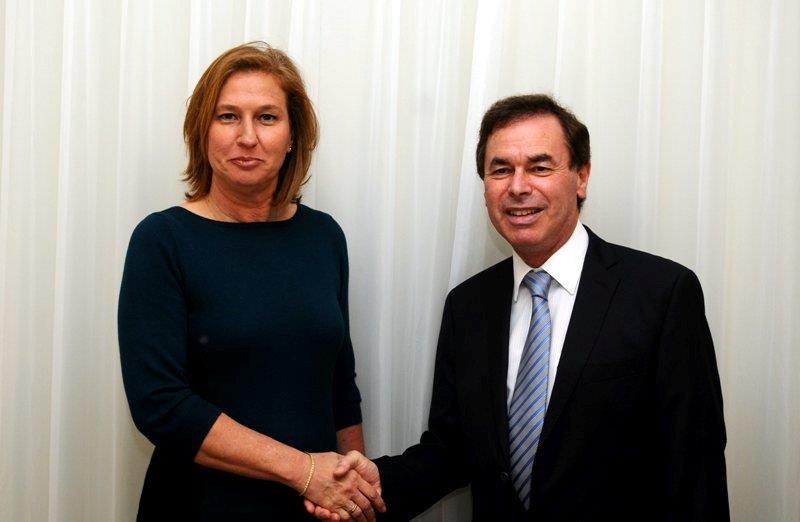 I overlook McKee Barracks. There are hardly any soldiers left in this beautiful barracks. Mr. Shatter had the soldiers sent to Athlone and Cathal Brugha Barracks, which of course is on his side of the city (Shatter is most certainly not above parish pump politics). Of course to be fair to him none of our local politicians (Dublin Central) did anything about this downgrading of the last remaining barracks on the north side of Dublin. No, they are too busy soft-soaping the welfare classes to the detriment those who wish to provide for themselves, those who work. By the way, our horsey classes are still in McKee. No marching orders for them to be sent to the wide open expanses of the Curragh. I digress.

Ask yourself how did someone with no experience get this ministerial position? Why is this individual now sending our army to one of the most dangerous places in the world while other countries are pulling their troops out? Why is nobody questioning this folly? Why are the Dáil and Seanad not being recalled? They of course are on holidays. Why is there not uproar amongst our liberal pacifist mediaocricy? Why have our sheen-arsed retired generalismos said nothing? Is it because – god forbid – Mr. Shatter is Jewish? Is he sending our soldiers to be maimed or killed to protect a supposed Jewish homeland? Is the thick paddy being sent to this war zone to protect Israel’s land grab, to protect its occupied territories?

Ask yourself why do our moronic politicians hold an official holocaust day? Why does Alan Shatter have a holocaust shrine in our Department of Justice headquarters? Does Israel hold an Irish famine day? Does it hold an official St. Patrick’s Day? Of course not. They, like there Muslim adversaries, think of themselves as ‘the chosen’ people. They seek monopoly on suffering. Ask yourself how many Catholics or Protestants hold high office in the Jewish Knesset. Indeed how many hold ministerial office? None. What did Israel ever do for Ireland? Indeed some of its militias were responsible for the deaths of Irish UN peacekeepers. Israel shelled UN compounds. It used phosphorous shells in urban areas. I for one do not feel guilty about the holocaust. Would I expect this generation of Israeli’s to feel guilty about the great famine? No. So lets do away with this nonsense. Mr Shatter and his Jewish cohorts are most welcome (along with our relatively new Muslim arrivals) to return to their promised lands. Take your obnoxious hatreds and wars home to your own countries. We have enough on our plate. Slán agus beannacht Mr. Schatter and co. Good bloody riddance.

Richard ‘Dick’ McKee (Risteárd Mac Aoidh) after whom McKee Barracks is named was born in this locality on the Phibsborough Road in Dublin 7. See the gallery section for photos of McKee Barracks.