The Belfast Agreement was overwhelmingly voted in favour of by the Irish people. It was grudgingly voted for by the British (that is what they want to be called) Unionist minority. Myself, I voted against it. Nothing since has changed my mind. Why? I hear you ask.

A: The Protestant minority did not apologise to the Nationalist, Catholic people of Ireland. They had after all 50 years to run the wee six properly. They could not and would not. Instead they bred more hatred and malice towards their neighbours.

B: I could not see why I should endorse morally their behaviour.

C: As I do not agree to partition I was not going to give mad rabid dogs like Paisley and his coven a whip-hand say in the matter.

D: If Irish politicians, trade unions, mediaocricy, churches, business people, all agree on something, my suspicions rise and I immediately reach for my revolver. There are other reasons of course. That is for another day. At the moment all I see is concession after concession to Unionist bigotry. They attack people attending annual blessings of graves. They orchestrate riots. They fly their flags to intimidate people. They burn the Irish flag and Catholic symbols on their bonfires. They will not attend GAA matches. They would not attend the Fleadh Cheoil in Londonderry (message to pinko Shinners – why is it still prefixed with London?). They march  through towns just to intimidate people. Their pastors(?) openly mix with that most nefarious of clipes, the Orange Order which is of course aligned with the delinquent murderers of the UDA, UVF etc. They do not even pretend to adhere to the spirit of the Belfast Agreement. Despite all this we continue to appease them. There are 400 years of hatred bred into these cowards. It is time that their vastly subsidised lifestyles were brought to an end or there will be another 400 years of inbred hatred to come. No more niceties, no more appeasement. Stop the money flow to these pariahs of nature. Starve their hatred. Do it out of Catholic generosity. Do it for future generations. Do it now.

Furthermore, enough of this dual passport malarkey. In the 6 counties they must make a decision. You are either Irish or British. As such you must accept one passport. Just like I do. I do not have the luxury of two passports. As people are intimidated by Loyalist thugs just because they have Irish car registration plates I suggest all cars registered to Loyalist Protestants be of blue colour. That way they can show their true colours when they venture “abroad” into Ireland proper. This is just another way in which they can express their ‘identity’. Catholic Nationalists can have a green plate. As I would proscribe the orange order, any senior member of this sick organisation would come before the special criminal court and their lands, houses etc confiscated. It is long past time that their criminality of the past – i.e. pogroms against Catholic people in the early 20’s which led to the murder of Catholic children and the fleeing of Catholics from their homes – was brought to the open. Let us not forget the refugee crisis created by the Loyalist Protestant in 1969. Thousands of Catholics fled to the protection and  safety of the civilised Republic. Let us not forget the barbarism perpetrated on their Catholic Nationalist neighbours by by the Protestant Loyalist terror for 4 centuries. After all they have their remembrance month where they ‘celebrate’ their servility to queenie and a ‘country’ that does not want them. Well, perhaps as machine gun fodder. Let them and their appeasers wear their poppies (rosette for first class eegit?). That way we can recognise their dubious identity. No more appeasement . No more niceties. Gilmore, Kenny, Martin, Adams etc can appease all they like. They do not and never will speak for me. The Unionist / Loyalist is an anathema to a civilised society. It is long past time for the iron behind the velvet to appear.

UPDATE 27/8/2017.
Belfast/Good Friday agreement has not been implemented. Their has not been an assembly for some months. One party the DUPe has been implicated in a half a billion sterling fraud. Yet the Brit Tories brought it into Government to shore it’s minority Government up. Any port in a storm. Do Irish people not understand once you gave a minority ie Unionists a veto over Agreement their will never be progress towards unification of our country. We allowed an obnoxious hateful MINORITY a veto on the national question. Think about it. Ireland will never reach its full potential until it is unified & our past put to rest. We did not cause the Troubles yet we guilted ourselves’ aided & abetted by ‘Irish’ mediaocre,politicians etc into believing we were in someway to blame. The fault lay squarely with Unionists & Brits. It is time now to cast aside Agreement because of Unionist veto. It is time to treat LOLoyalists with the contempt they so richly deserve & show them up for what they are; Brit parasite rentboys. It is time to call theirs & indeed Sinn Féins bluff. PS. No to a federal Ireland & no to any special status for Unionist minority in united Ireland. 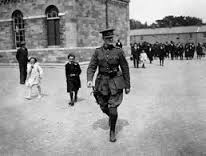 NO dual passports. After all what kindness did Protestant Unionists show Catholics in their artificial statelet. It is time to finish what Collins began & implemented.